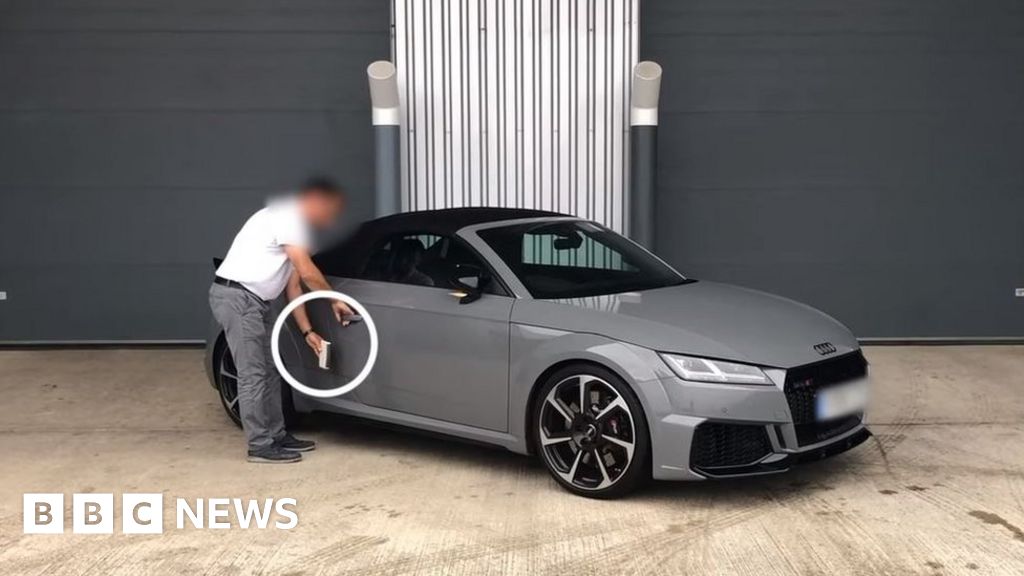 Some of the UK’s newest and most popular cars are at risk of being stolen in seconds by exploiting weaknesses in keyless entry systems.

The systems let drivers open and start their cars without taking their key out of their pocket.

They measured the time it took to get into the cars and drive them away.

Car theft rates in England and Wales have reached an eight-year high. In 2018, more than 106,000 vehicles were stolen.

And motor theft insurance claim payouts hit their highest level in seven years at the start of 2019.

The Association of British Insurers said claims for January to March were higher than for any quarter since 2012.

It said a rise in keyless car crime was partly to blame, but did not have figures on what proportion of claims were for keyless vehicles.

Audi’s parent company, the VW Group, said it collaborated with police and insurers as part of its “continual” work to improve security measures.

The PSA Group – the parent company of DS – told What Car? it had a team dedicated to treating potential security weaknesses and worked closely with police to “analyse theft methods”.

It also said dealers could deactivate the keyless entry systems on the latest cars at the owner’s request.

“In addition, all our vehicles are available with InControl tracking devices which have delivered a more than 80% success of recovery.”

A car theft that nearly destroyed a holiday

Stephen Savigar, 59, from Newport, South Wales, was on his way to Heathrow Airport with his wife and two friends when they became victims of keyless car theft.

The couples were flying to Singapore for a cruise to celebrate his wife and her friend’s 60th birthdays.

The thieves struck when they stopped for a toilet break at Reading services. Mr Savigar’s Ford Mondeo was not stolen, but what was taken from the car almost ended their holiday on the spot.

“While we were inside thieves jammed my car’s locking system,” he said. “They stole my travel bag which had mine and my wife’s passports inside, as well as our glasses and an iPad.

“It meant we were unable to fly. But we still dropped our friends to the airport and waved them off at the desk. My wife ended up passing out at the desk as we were in a terrible state.”

The couple drove home, went to the passport office, travelled back to Heathrow the next day, and paid for another flight with a different airline. They made it to Singapore just in time to catch the cruise.

Five months later Mr Savigar said he still felt upset talking about it. “It was an absolutely horrific experience. We had been planning this trip for two years. It’s a horrendous crime.”

‘People are being misled’

Andrew from North London had his keyless Mercedes c220 stolen from outside his home in November last year. “The vehicle had keyless entry and my keys were not even near the front door,” he told the BBC.

The vehicle is still missing and Andrew said Mercedes has not been able to explain how this happened.

He said: “I was given the line by Mercedes that if I double tap my key when locking the vehicle it will be safe as the key does not transmit. For me that was standard practice, I had known about this function, the key was on the third floor at the back of my house.

“I believe people are being misled when manufacturers say vehicles are even more safe. According to my insurance there had been more than 10 cars stolen with keyless entry in my postcode in London alone , in that month.”

Thieves, normally working in pairs, will target a car parked outside a house.

One criminal will hold a device close to the car that boosts the signal meant for the key, while the other thief will stand close to the house with another device that relays that signal to the key, fooling the system.

Once the cars have been stolen, they will be stripped for parts, police say.

What Car? was unable to break into cars that had motion detection installed as a safety measure, however the technology is not available across the car market.