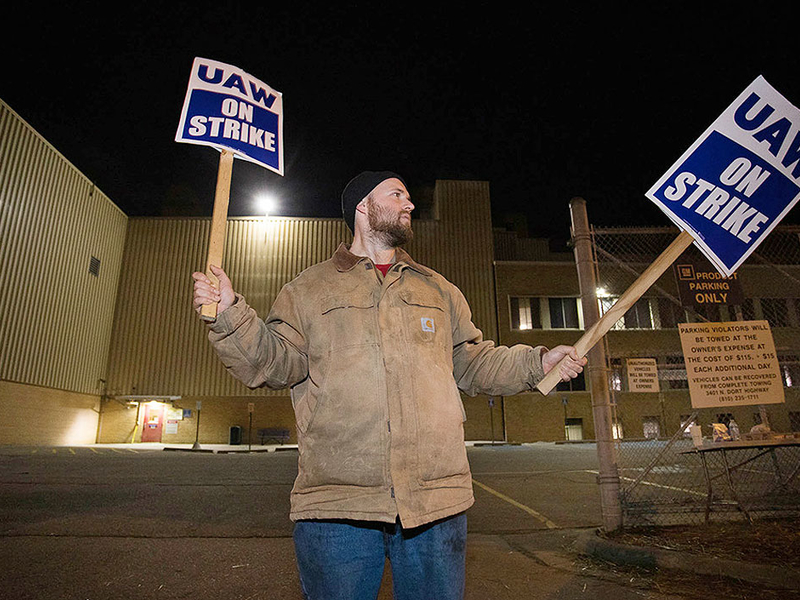 “A cop?” Michael Beck wonders aloud. The 31-year-old temporary worker from Chassis 4 questions how he and his coworkers had drawn attention to their patch of curb along five-lane Van Slyke Road.

The relatively small band of third-shift employees staffing picket lines from 3 a.m. to 7 a.m. hasn’t seen much action since the strike against GM began in mid-September. The hours typically bleed into one another, with a mundane quiet broken only by the rumble of a passing car or occasional small talk.

Are the flames of their burn barrel too high? The wood inside had been generously stacked in anticipation of the night’s low temperature of 42 degrees — the coldest of the strike to date.

Or is the nearby dark blue Dodge Journey, belonging to a coworker, parked too close to official GM property?

Beck quickly gets his answer.

“You guys need some wood?” the Tahoe driver asks as he hops out, opening a rear door to reveal a plastic trash can full of chopped up pallets.

The Good Samaritan identifies himself only as a member of UAW Local 651, which represented workers at GM’s nearby Davidson Road Processing Center. The flashing lights came from his side job as a volunteer firefighter.

He helps the group restock their dwindling wood pile, shook workers’ hands and drove away.

“See that?” Beck says. “It’s people like that who keep us going.”

If there were a limit to solidarity, you might expect to find it in chilled faces of third-shift workers picketing in the early morning dark, when the national walkout is the least glamorous.

No presidential candidates pose for photos during these workers’ four-hour stints on the picket lines. There are no TV reporters standing nearby prepping for live shots. On this particular night, the food donated the previous day has mostly vanished, save for a stale slice of Little Caesars Hot-N-Ready pizza and a couple loose hot dogs that had escaped their packaging and bloated from hours soaking in a cooler of ice water.

Temperatures since the strike began have dipped about 20 degrees, and promise to fall further with each day the work stoppage persists.

But there’s little wind on this brisk autumn night, and 19-year-old Leah De Mand doesn’t think the workers have it so bad.

She and her boyfriend, Chad Guenther, had finally remembered to bring fold-up camp chairs so they’d have somewhere to sit. Their shift the prior week was much tougher.

“It was cold and rainy,” she says.

It’s been nearly a month since “Vehicle City,” as Flint is known, has churned out any vehicles. The initial hype of the first strike against a Detroit 3 automaker in more than a decade has faded, but rank-and-file continue to show up here, at all hours of the night, to fight for what they believe are fair demands focused around wage gains and protections for younger workers.

Their mood hasn’t shifted, even if the weather has.

“Rain, snow, darkness — it doesn’t matter,” Beck says as he tosses another log on the fire, sending a burst of embers scattering into the overcast sky. “We’ll go as long as it takes.”

Joining Beck at Gate 6 this night are De Mand, who hired in as a temp back in April at the urging of her cousin; Guenther, who’s not a GM employee but wanted to support his girlfriend; and Gary Brown, a 42-year-old temp hired 11 months ago, the same time as Beck.

Their setup is relatively modest: a blue tarp shielding the fire wood from the elements, a smattering of fold-up chairs and “UAW ON STRIKE” picket signs and a tent canopy covering a fold-up table and plastic tubs full of napkins and Styrofoam plates. An American flag hangs from the chain-link fence separating the curb from plant property. There’s a propane grill on the far end of the gate, even if there’s no food to cook on it.

De Mand works containment, checking heavy-duty Chevy Silverado and GMC Sierra pickups for flaws, while Beck and Brown install harnesses on the vehicles’ chassis. All three want guarantees in this contract that they’ll be hired full-time.

“We’re working just as hard as everyone else,” says Brown, a Florida native who moved to Flint a few years ago and originally avoided applying to GM because he heard it had a high layoff rate.

Temp work can be demanding, they say, if not occasionally demeaning. Beck says he lost 20 pounds on the line since he was hired in, while De Mand recounts one night when she and other temps were ordered to go clear seagull eggs off the roof of the plant.

Temporary workers top out at around $19 per hour, while full-time legacy employees earn about $30. Temps also have fewer health care benefits — no vision or dental — and get no paid time off.

For De Mand, a full-time job would mean not only more security, but also the continuation of a family tradition. Her cousin — the one who persuaded her to join GM — recently was hired full-time at another facility. Her grandfather, now retired, used to work at Flint Assembly.

“He’s happy we went on strike to try and make a change,” she says. “He wants us to have a better life.”

The fight for long-term security is causing some short-term pain.

Workers are required to sign up for one four-hour shift per week to qualify for their $250 strike check, the only compensation they’ll get from the union as long as the walkout lasts.

For many, that means wondering how to feed their family, or just how far they can go on a tank of gas. Workers here say they’ve seen colleagues bring their children to the picket line because they can’t afford babysitters.

De Mand lives about 45 minutes away from the plant but recently gave up her car because she couldn’t afford the insurance. She’s borrowing her brother’s white Silverado Duramax. She’s grateful to have transportation, but not so much for the $60 in gas she has to pump into the tank every two or three days.

Guenther, who works at a metal painting factory, says he’s been donating plasma when he can to help the couple keep up with bills.

“It gets to be a bit of a struggle,” De Mand admits.

Even picking up the strike check can be a challenge. De Mand normally works the line early Saturday morning, but the checks aren’t ready to be picked up at the union hall until Sunday. That means either waiting nearly another full week for her earnings or hopping in the pickup for another costly roundtrip drive.

Shortly after the volunteer firefighter’s visit, the group is joined by 46-year-old full-time employee David Ramirez and 53-year-old temp worker George Kapellas, who’ve wandered over from another gate to see what the flashing lights were about. Both work in trim, installing doors, airbags, seat belts and other parts on the large pickups.

Ramirez, who joined GM in 2006 and is now on his fourth plant, says Flint Assembly is his favorite. He likes his coworkers but is also aware of the city’s importance to both the UAW and GM.

Flint, aside from being the birthplace of what became the country’s largest automaker by volume, was home to the sit-in strikes during the 1930s that helped cement the UAW’s status as a top-tier union. A 54-day strike in 1998 at the metal-fabricating plant down the road helped win the site new equipment and work.

“When we walked out,” he says, “it felt historic.”

The temps among the group say they were less in awe over their place in history as they were annoyed about having to report to work for two hours that first Sunday night, and in the process cross a picket line of UAW-represented Aramark custodial workers who went on strike against GM the day before.

For her efforts that evening, De Mand received a $38 check. The mood inside the plant was tense, but it shifted at 11:59 p.m., when the strike against GM started.

“There were so many people running around and chanting,” she recalls. “It was like a carnival.”

If the party started just before midnight Sept. 16, Beck is determined to keep it going three weeks later.

Instead of sitting around the fire, he grabs a picket sign and dances to Cardi B, Drake and whoever else blares from the radio of Brown’s Dodge Journey, tuned to Flint’s 93.7 FM.

Beck was that way inside the plant, too, Brown says — always keeping the mood loose and entertaining.

“You have to keep it going,” Brown says. “It’s the graveyard shift. These are the longest nights.”

Most of the crew keeps close to the fire, chatting about union-friendly bank loans they’ve read about or wondering how long a burn barrel can last before its sides buckle from the intense heat within.

Ramirez says he likes to pass the time listening to podcasts. He and Kapellas grab picket signs and stand alongide Beck for a time before heading back to tend to the fire at their own gate.

Another favored pastime on the picket line? Stopping contracted workers from entering the plant.

Workers say they’ve been told they can block vehicles from entering for no more than 10 minutes, and Beck says sometimes the cars get backed up down the road waiting for the mass of pickets to part.

On this night, though, only a handful of security guards try to pass the gate. The group doesn’t hold them up.

At precisely 7 a.m., as the first faint traces of sunlight peek out of the east, De Mand, Guenther and Brown all stand up to leave. Another shift down, an untold number left to go.

Beck, still standing in front of the gate with a picket sign, doesn’t feel quite right leaving just yet. He’d hate to leave their post unguarded, even for a few minutes.

“I’ll wait around until some other people show up,” he says. “This is important to me.”