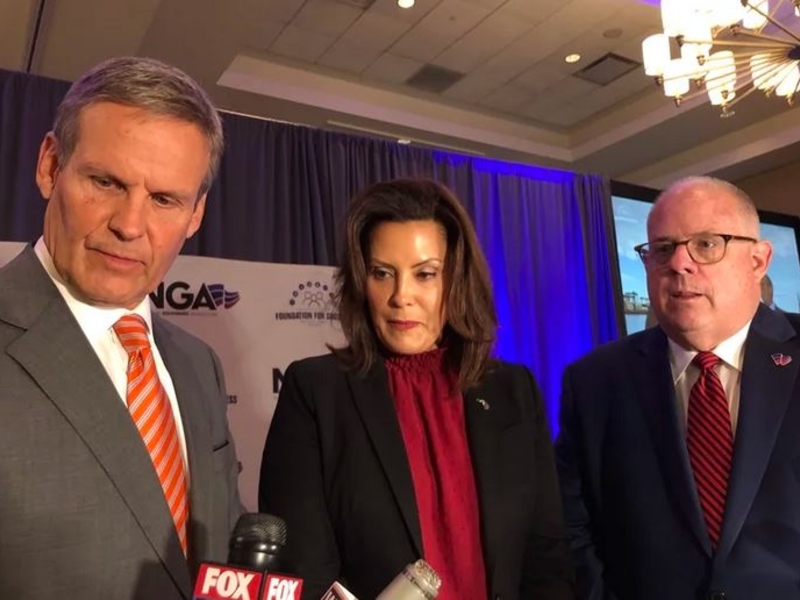 DETROIT — Michigan Gov. Gretchen Whitmer is urging striking UAW members to ratify a proposed contract with General Motors to end the longest strike at the Detroit automaker in nearly a half-century.

“I am hopeful that it gets ratified and that people feel good about the terms that they got,” Whitmer said Friday at a National Governors Association event in Detroit.

Lee also said he encourages UAW members to approve the new four-year contract with GM, which has a plant in Spring Hill, Tenn. that produces GMC and Cadillac SUVs.

“We have 3,800 workers at our plant in Spring Hill, Tennessee that we want to get back to work — that’s a lot of families affected by what’s happened here,” Lee told reporters. “We certainly hope that the agreement can happen and those workers are back to work.”

The UAW strike of GM — already the longest since 1970 — entered its 33rd day on Friday.

Informational meetings regarding the details of the tentative deal will begin on Saturday. The UAW’s spokesman originally said voting would start Saturday as well, but later said individual locals would set their voting times and he was unsure when it would begin. The process is expected to wrap up by 4 p.m. on Friday, Oct. 25.

GM’s tentative contract agreement with UAW hourly workers calls for a $11,000 ratification bonus, lump sum pay raises of at least 3 percent, shortening the ramp for top wages for new hires from eight years to four years and creating a pathway for temporary workers to get permanent jobs after three years.

Prolonging the strike by another week means an additional $400 million in losses for GM, according to the Anderson Economic Group, a consulting firm in East Lansing, Mich. UAW workers will lose $14 million more in lost wages per day, and supplier employees who continue to be laid off will lose $20.5 million per day, the firm estimates.

Even if UAW members ratify the new four-year contract, the economic impact of the strike could be felt for months to come.

Crain’s Detroit Business, an affiliate of Automotive News, first reported Friday that automotive seating supplier Adient plc plans to furlough 1,300 corporate employees over the holiday weeks of Thanksgiving and Christmas because of “unplanned loss of sales and profit” from the GM strike.

GM’s proposed contract with the UAW could save its Detroit-Hamtramck Assembly plant from being shuttered.

The automaker has pledged to invest $3 billion in the plant straddling the borders of Detroit and Hamtramck to build electric pickups, vans and battery modules, according to a copy of the proposed contract first reported Thursday by Automotive News.

Whitmer said GM has been “mulling over what it would take” to retool the 34-year-old Detroit-Hamtramck plant for producing electric vehicles.

The governor said she’s open to tax incentives for GM to retool the plant if it produces “jobs and real investment in this state.”

“No one’s asked me for anything at this juncture,” Whitmer told reporters. “But considering that this is a long, thought-out investment that apparently they’re interested in making, I would anticipate conversations being had.”

Automotive News contributed to this report.

How Lucid brought the Air Pure EV in for under $90k
We’re Taking The 2022 Lexus GX 460 On A 2,000 Mile Roadtrip; What Do You Want To Know About It?
Tesla is set for a record breaking Q4 in Norway
Woman dies in crash during test drive outside Florida Nissan dealership
Lancia unveils new logo, design language ahead of relaunch