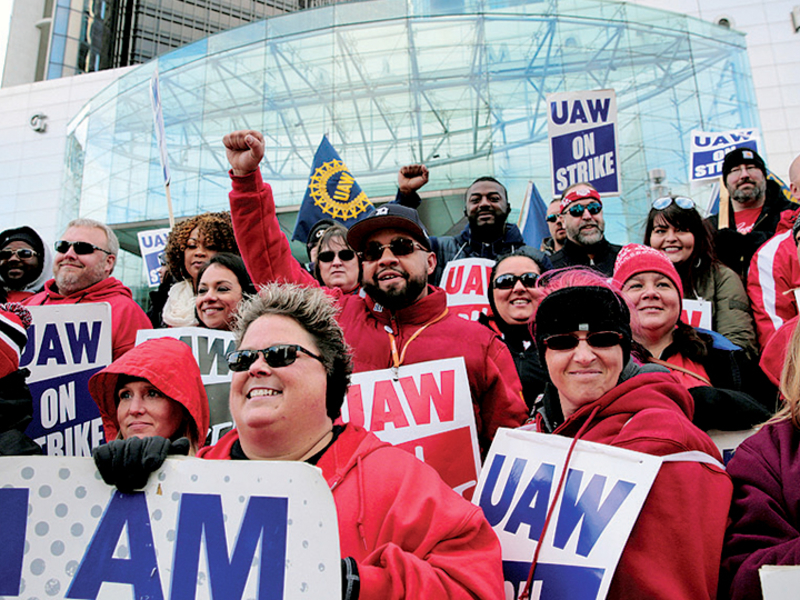 DETROIT — A proposed contract with General Motors that more than 46,000 UAW members are voting on this week contains lucrative bonuses and wage gains, but it doesn’t bring any production from Mexico to the U.S. or save three plants that shut down this year.
The UAW’s national strike against the automaker will extend at least through Friday, Oct. 25, as the tentative agreement GM reached last week with union leaders goes to the rank and file for ratification.

UAW officials are touting the fact that the deal addresses many top priorities: wage increases, a path to permanent employment for temporary workers, no increase in health care costs and a shorter wait for new hires to earn top wages. Full-time hourly workers would receive bonuses of $11,000 and 4 percent of their annual pay shortly after ratifying the contract.

“A lot now depends on how they explain it to members and how transparent they are,” Kristin Dziczek, vice president of industry, labor and economics at the Center for Automotive Research in Ann Arbor, Mich., told Automotive News.

But the UAW’s failure to save Lordstown Assembly in Ohio and two transmission plants in Michigan and Maryland has put many members on edge and could complicate ratification. If the deal passes, the UAW would then use it as a framework for contracts with Ford Motor Co. and Fiat Chrysler Automobiles.

“You really never walk away completely satisfied,” said a member of the UAW’s GM council who asked not to be identified. “You hope and pray your membership understands.”

The GM council’s decision last week to endorse the contract but continue the strike to at least 40 days is an unusual move for the union, but if UAW members return to work and then reject the contract, “the leverage is gone,” said Art Schwartz, a former GM negotiator who’s now president of Labor and Economics Associates.

An additional week of the strike will result in $400 million in operating losses for GM, according to an estimate from Anderson Economic Group, a consulting firm in East Lansing, Mich. The firm estimates that it will cost the striking workers a total of $14 million in wages per day and laid-off supplier employees $20.5 million a day.

Even if UAW members were to send their leaders back to the bargaining table, GM is unlikely to reverse its decision to shut down the three plants, Schwartz said.

“The union tried their very best to keep those plants open. Basically, they got a lot of money and other benefits to [treat] the wound,” he said. “How can they get all that stuff and reopen the plants as well?”

Detroit-Hamtramck Assembly is the only one of four U.S. plants GM targeted for closure last fall that would remain open under the agreement. The 53-year-old Lordstown plant that President Donald Trump and other politicians had lobbied GM to spare would be officially closed for good. A parts distribution center in Fontana, Calif., that employs 31 hourly and 24 salaried workers also would close, the agreement says.

Under the proposed contract, GM would spend $5.7 billion to create or retain about 9,000 jobs at four U.S. plants and its suburban Detroit tech center through 2023, plus $2 billion to refurbish other unspecified plants.

The automaker also is aiming for $1.3 billion in indirect investments — resulting in up to 1,400 jobs in and around Lordstown related to battery-cell and electric pickup manufacturing — bringing total spending to $9 billion. The Lordstown investments are not part of the tentative agreement with the UAW.

GM agreed to invest $3 billion in Detroit-Hamtramck Assembly to build electric trucks, vans and battery modules, according to language in the proposed contract. The plant, which was scheduled to close in January, would employ 2,225 people at full capacity, GM told the union.

GM also pledged investments in next-generation midsize pickups in Wentzville, Mo., next-generation utility vehicles in Lansing, Mich., and Spring Hill, Tenn., and preproduction operations in Warren, Mich. The contract does not discuss moving any production from Mexico to the U.S.

The $7.7 billion in direct investments represents a decline from the $8.3 billion GM pledged in the 2015 labor contract. The 2015 commitments touched 12 plants but amounted to smaller investments at each one.

Dziczek said the permanent shutdown of three plants will be hard for UAW members to swallow and that many will want to know details about upcoming plant investments.

There was considerable negative reaction to the deal on social media immediately after details became public, with many workers confused about issues such as new pay scales and the time it takes to reach top wages.

“Right now, they’re reacting to media reports,” Dziczek said. “They’ve got to go to these educational sessions and read it themselves.”

Dziczek said there’s likely to be a bloc of voters who will reject the contract on principle, with the knowledge that the union got a better deal with FCA in 2015 after members rejected the first tentative agreement with the automaker.

The UAW could have a tougher time than usual getting Ford and FCA to follow its pattern-bargaining philosophy with respect to the GM deal, if it’s approved.

“The things GM won, neither of them wanted to do,” Dziczek said. “GM achieved the ability to close three plants, which is a win that Ford or FCA aren’t trying to get.”

Ford and FCA, in separate statements, said they were continuing to work toward reaching fair agreements with the UAW.

Neither of the other automakers has been struggling with U.S. plant capacity utilization as much as GM. FCA was at 86 percent and Ford was at 82 percent, compared with 71 percent for GM, according to LMC Automotive.

Ford has more U.S. hourly workers than GM, and FCA has more temps and in-progression workers earning wages below the top rate. The raises in GM’s tentative deal would cost both companies more.

In addition, GM’s decision to keep health care costs unchanged will be a blow to both companies, which were each looking for relief in that area. Before talks began, Ford projected that its health care costs would top $1 billion next year.