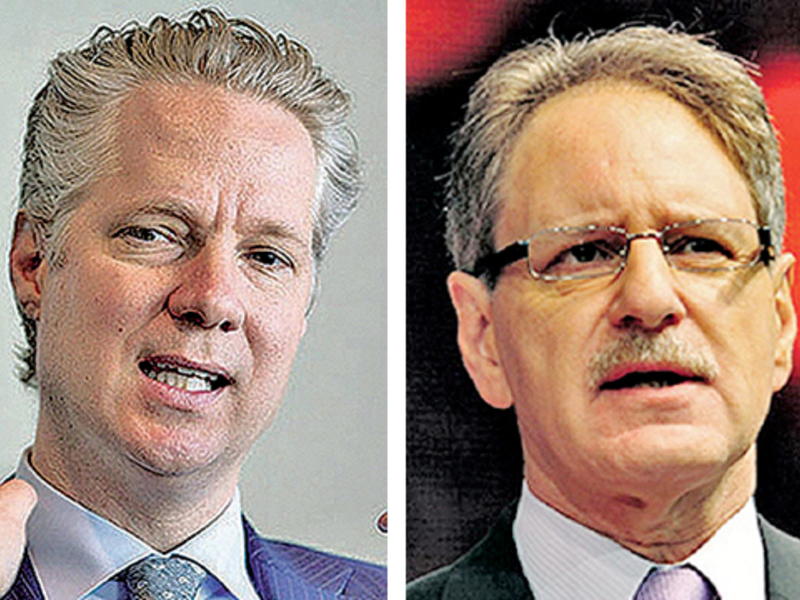 CHATTANOOGA — CEO Scott Keogh is reorganizing Volkswagen of America using his onetime boss — luxury veteran Johan de Nysschen — as a relief valve and focusing his own efforts on the things he knows and does best: marketing and selling automobiles and working with dealers.

The management restructuring comes as Keogh, 50, finishes his first year since his promotion to lead the Volkswagen brand across the U.S., Mexico and Canada; Volkswagen Group of America, which includes VW’s sibling brands; and production, engineering and purchasing on the continent.

The change splits responsibilities, Keogh explained, into two silos roughly delineated by the point at which a dealer might receive a vehicle from the factory.

De Nysschen, 59, was hired by Volkswagen on Sept. 26 for a new position, COO of Volkswagen of Am- erica. He headed Cadillac from 2014 to 2018. De Nysschen had immediately preceded Keogh as president of Audi of America before leaving in 2012 to head the Infiniti brand. His hiring had been under consideration for several months, according to sources.

In de Nysschen, Keogh has a familiar, seasoned executive in whom he can entrust about half of the burdens of his three-pronged job, including roughly half of what had been 27 direct reports, the CEO said.

“The intent with Johan is to have Johan take on the lead and the behind-the-curtain operational goals,” Keogh told Automotive News this month. As COO, de Nysschen’s job is to take a vehicle “from conception … and get it to the dealerships.” That would entail the South African executive overseeing Volkswagen’s engineering, manufacturing, purchasing and logistics in North America, Keogh said, including the brand’s two assembly plants on the continent, in Chattanooga and Puebla, Mexico.

“That will free up myself to work on the group and obviously work on the brand and make it perform better and be stronger and represent Volkswagen,” Keogh said.

From a product standpoint, Volkswagen is transitioning from what had been a sedan-laden lineup to one filled with crossovers. In his COO role, de Nysschen will have a big responsibility to carry out that change.

While the redesigned Jetta continues to sell well — through September, Jetta sales were up 22 percent in the U.S. — the automaker amended a plan to redesign the aging and slower-selling Passat onto its global MQB platform in favor of a refresh to save money. It also ended production of the Golf SportWagen and culled its other Golf offerings to just the two higher-priced models, the Golf R and Golf GTI.

This month, Volkswagen revealed the five-seat Atlas Cross Sport here. The two-row version of its larger and older seven-seat Atlas crossover will compete directly with the Jeep Grand Cherokee and Ford Edge.

The Cross Sport, set to arrive in U.S. dealerships in the first quarter of 2020, fills a gap in Volkswagen’s U.S. lineup left when the brand discontinued the Touareg after the 2017 model year. In 2021, the brand will expand into the subcompact crossover segment with an offering slotted below the current Tiguan, Keogh said.

“We also see a massive opportunity in the [subcompact crossover] segment. … I think if you look at the Tiguan, in fairness, the first-generation Tiguan, we used to sell, I don’t know, maybe we made it to 40,000 units? With this generation Tiguan, we’ll get that car up around 100,000 units, this year,” Keogh said. With mass-market crossovers accounting for 4 million sales through September, there is room for Volkswagen to expand with an offering below the Tiguan. “We’re going to add a vehicle that will sit a little bit smaller, allow us to hit a price point, hit a package, hit a size.”

Late next year, the brand will begin selling the first of what will be at least three battery-electric vehicles in the U.S. The ID4 compact crossover is about the size of the Tiguan and will be imported from Europe for about two and a half years before production can begin in Tennessee, Keogh said.

With de Nysschen handling the “behind-the- curtain” operation, Keogh and new Chief Marketing Officer Saad Chehab will be responsible for overseeing the brand’s restoration and growth. Volkswagen has a long-term goal of returning to the 5 percent U.S. market share it enjoyed in 1970, about double where it is today. Right now, the brand is without a permanent head of sales.

While Chehab is busy readying a marketing strategy, Keogh said his “No. 1” job is keeping the organization moving in the right direction.