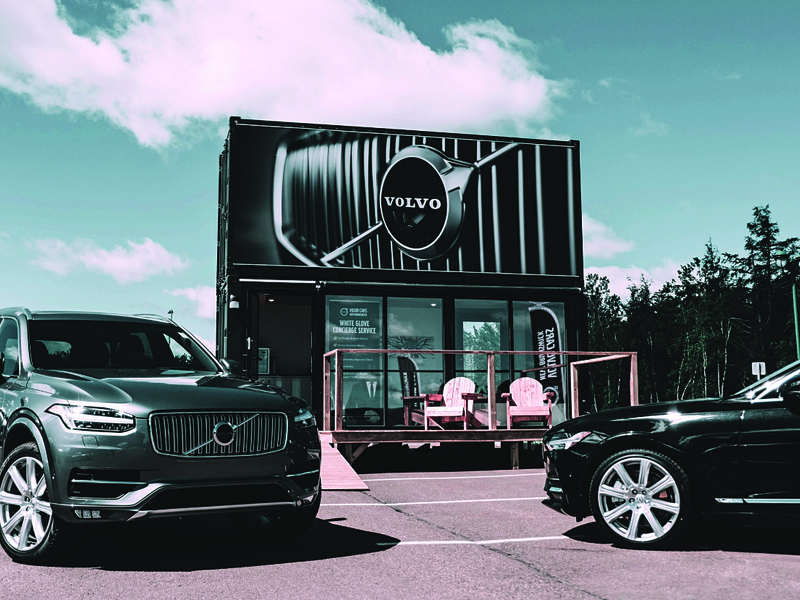 With several small, similar-sized cities sprinkled across a large area of eastern Canada, New Brunswick is a tough market for dealers seeking to maximize sales and profits.

Dave O’Leary, president of Volvo Cars New Brunswick in Fredericton, said he has a solution: He takes his show on the road with the help of a mobile pop-up dealership.

“When I bought the Volvo store in 2016, it had not operated anywhere near the volumes that it needed to be successful,” O’Leary told Automotive News Canada. “At that time, we had to get really creative to make sure, if we were on anybody’s radar in New Brunswick, that there was no reason they wouldn’t buy a Volvo from us.

“We wanted to try to figure out a way to truly be present throughout the province, but not with multiple multimillion-dollar dealerships.

“We came across an article that showed Volvo had corporately built a pop-up very similar to what we ended up building for corporate events, [and] we had a discussion about allowing us to basically replicate on our own what they had done.”

Constructed three years ago from two 20-foot shipping containers, the portable store was built at the dealership from scratch by O’Leary and another handy member of his service team, and designed to conform to Volvo’s corporate branding standards. The containers can be relocated by loading and unloading them with a crane onto a truck bed.

“They travel on a 53-foot flatbed or two individual flatbed tow trucks,” O’Leary said. “When they get to the site, your main unit, which is your showroom, gets set up; and then your second container, which carries your deck and chairs and generator, all the gear that you would need comes out, and then it gets stacked on top of the first one and becomes the billboard.”

Since buyers at any pop-up location will be purchasing their vehicles from outside the Fredericton area, the initiative has spawned another level of service for the dealership’s customers.

“If you buy a brand-new Volvo or Volvo certified pre-owned from us, you automatically qualify for our white-glove service program,” O’Leary said. “That includes free pickup and dropoff for service no matter where you live in New Brunswick.

“If you live in Moncton or Shediac or Bathurst or wherever, you call and book a service appointment with us. We send one of our vetted drivers to bring you a courtesy car, drop it off in your driveway or your place of work, pick up your vehicle and bring it to us, service it, and then we bring it back to the owners.

“There’s no charge for that. We allocate that as part of our marketing and advertising budget.”

Despite the additional miles on vehicles in need of servicing, O’Leary said he has yet to hear any concerns from customers.

The pop-up store fits anywhere there’s a flat space, said O’Leary, and added that he looks for high-traffic areas. “We’re already planning our timelines for events for next year. We’ll be hitting other municipalities in the northern part of the province. We obviously have to stay [within] New Brunswick, which is our franchise territory, but P.E.I. is kind of open ground, so [it] would certainly be a possibility.”

The dealership’s new-vehicle sales have risen to 149 in 2018 from 75 in 2016, according to Volvo Canada. As well, Volvo Cars New Brunswick has gone from being one of the lowest-performing Volvo dealers in Canada in 2016, to the second-highest in market share, commanding 9.19 percent of all new-vehicle sales in New Brunswick during the first seven months of 2019. And, the dealership has over the last three years received the Volvo Excellence Award, granted by the automaker for “exemplary performance” in new and certified pre-owned vehicle retail sales, parts and accessory purchases, and a commitment to the Volvo retail experience, said company spokeswoman Amanda Ignatius.

Other dealers appear to be interested in duplicating O’Leary’s pop-up store.

“We’ve had a few dealer groups that have actually come and looked at the pop-ups and are in different stages of asking about us building one,” he said. “We’ve designed this to be Volvo-specific, but you can make one of these appear to be a Lamborghini or a Porsche or a Lexus or a Hyundai store just as easily.”

UAW presses automakers to move supply chain out of Xinjiang
College invests in next-gen technicians
Ford Pro agrees to send 2,000 electric vans to Deutsche Post DHL Group
Is This The Tesla Model 3 Refresh With Its Front And Rear Under Camouflage?
Redwood Materials approved for over $100m in tax incentives