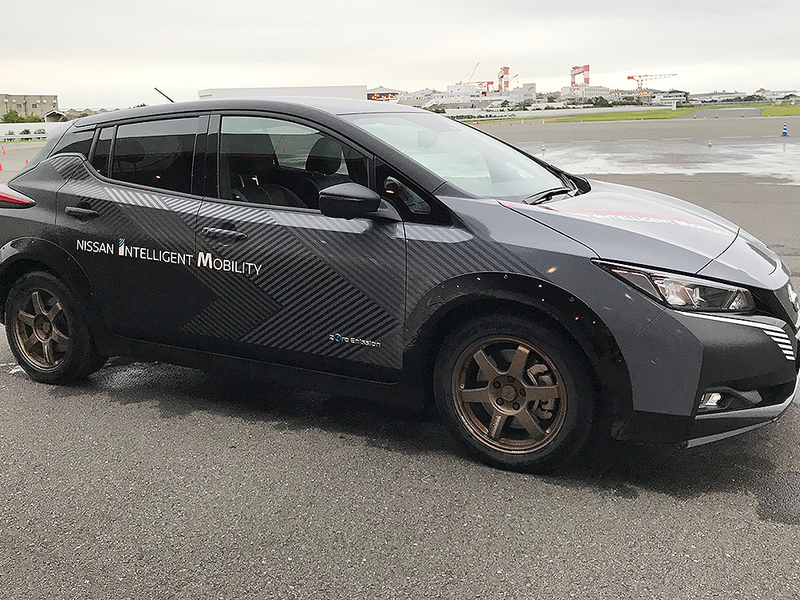 The automaker unveiled its plans for a next-generation technology blitz here at its advanced technology center outside Tokyo this month.

Some of the goodies — such as the full-electric awd system — are closer to production than others. But the offerings underscore Nissan Motor Co.’s push to promote itself as a leader in the burgeoning fields of electrification, autonomous driving and connectivity.

Among the powertrain developments, Nissan says it is working on its own solid-state battery technology for electric vehicles as well as a super-efficient internal combustion engine.

“This can be a real game changer,” Doi said.

The solid-state batteries will likely be market-ready within 10 years, Teraji reckoned.

Nissan is also working on more efficient internal combustion engines to use as an electricity generator in the company’s range of e-Power hybrid vehicles. Those vehicles use a small gasoline engine to charge a battery that runs an electric motor, which then turns the wheels.

Nissan said the thermal efficiency of its engines is around 40 percent today, but it expects to boost that to 50 percent as early as 2040. Thermal efficiency is a measure of how much energy is lost to heat through internal combustion. A higher efficiency rate is better.

Nissan believes it will get there through a combination of efforts, such as developing more efficient lean-burn combustion cycles, making improvements in heat recovery and taking new approaches to variable compression.

Also in the works is a new twin-motor, all-electric awd system. It is expected to debut in a production crossover as early as 2020 and reach the U.S. in 2021. That vehicle is previewed by the Ariya Concept crossover Nissan is revealing this week at the Tokyo Motor Show.

A prototype drivetrain demonstrated for reporters at Nissan’s Oppama proving ground south of Tokyo had a 160-kilowatt motor on each axle. They were powered by the 62-kilowatt-hour lithium ion battery used in the Leaf Plus, the longer-range version of Nissan’s flagship EV hatchback.

Overall output of that system is limited to 227 kW because of the battery size. A larger battery would be able to produce more oomph, said Toshiyuki Nakajima, the lead engineer of the system.

The actual production version will have different specifications, Nakajima noted.

Engineers demonstrated the technology by wedging the new powertrain into a retrofitted Leaf. If the production version appears in an Ariya-inspired crossover, it would be expected to ride on a new dedicated EV platform jointly developed by Nissan and French partner Renault.

The two-motor system delivers high-torque, precision handling and outstanding stability, Nissan said. It achieves this by optimizing power delivery to each of the four wheels.

Power flow to the front and rear motors can be independently controlled, while torque to the left and right wheels can be further modulated through coordinated braking.

“This has a lot more precision than an internal combustion engine or even an ordinary EV,” Nakajima said, adding that the system has been in development for more than three years.

Aside from exhilarating acceleration and sure-grip handling on slippery surfaces such as snow and wet pavement, dual-motor control also makes for smoother deceleration. By blending the braking of both the front and rear wheels, the car lurches less and eases the strain on passengers’ necks.

Nakajima declined to say when it will reach market, but said, “We’re almost there.”

The two-motor system can be applied to a range of vehicle types, from SUVs and sedans to hatchbacks, and it can be mated to Nissan’s e-Power setup, Nakajima said.

Another technology that can be found in the Ariya Concept is a new “seamless integrated” two-screen cockpit display.

It consists of two 12.3-inch screens mounted onto a single instrument panel. The one in front the driver shows the gauges. The one in the center column is touch sensitive and controls navigation and infotainment. It is expected to hit the market as early as next year.

But that display is just a steppingstone toward the true goal of a screen that stretches the width of the cockpit. Nissan also showed a prototype of that system.

Its whole front screen can project a live video stream of the road ahead, with superimposed digital navigation arrows to guide drivers to a specified destination. It is voice controlled and follows the driver’s line of sight to help predict what the driver wants to do.

Engineers hope to have that for sale as soon as 2025.

Nissan is turning to virtual reality in an effort to spice up the commute in a future when people aren’t tied down by having to drive themselves.

With all that free time, drivers and passengers may want to connect with others who aren’t even in the car. Hence the development of Nissan’s Invisible-to-Visible system.

The invisible components are the people far away from the car: those at home, in school or at the office. They are made “visible” to people zooming down the highway through the magic of virtual-reality goggles and a high-speed 5G cellular connection. A Nissan demonstration of the technology had two women rigged with goggles and sensors beamed as virtual-reality avatars into a vehicle, where they could chat and interact as if sharing the car with its goggle-wearing passengers. Nissan envisions this being used to make the most of downtime in self-driving cars. Passengers can hold meetings, take guided tours or attend virtual classes.

Still unknown is how practical this will be. The company says it could be commercialized as early as 2025, if public demand for virtual reality takes off.