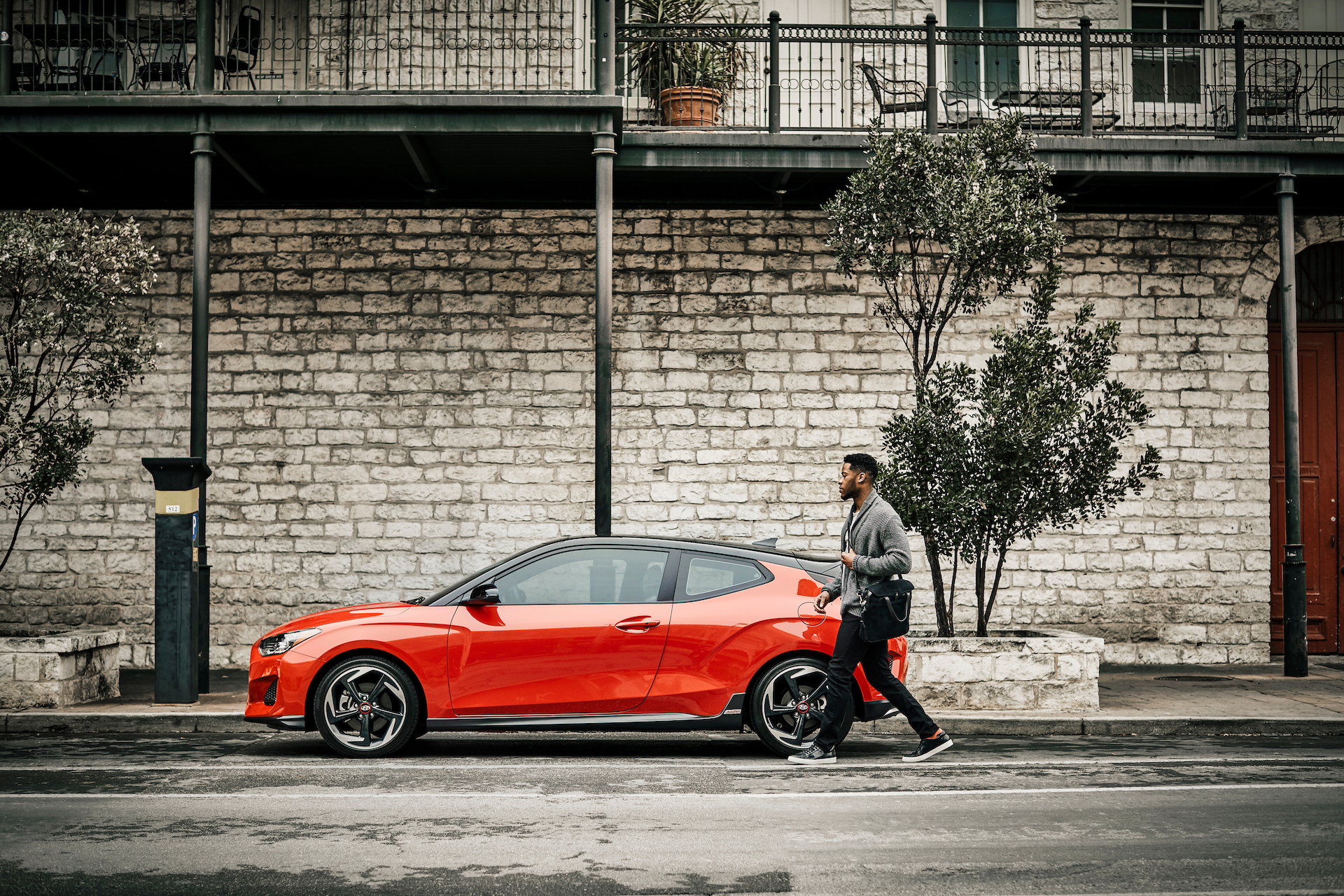 The 2020 Hyundai Veloster comes in three configurations, each with its own 4-cylinder engine and its own personality. Our 6 out of 10 rating here applies to the Veloster Turbo, which earns a point above average for its acceleration. The zippy Veloster N would add a couple of points for straight-line acceleration and handling. (Read more about how we rate cars.)

Base cars use a 2.0-liter inline-4 rated at 147 horsepower and 132 pound-feet of torque, which sends power forward through either 6-speed manual or 6-speed automatic transmissions. We’ve not driven this version, but we have enough seat time in other Hyundais with this powertrain to know that acceleration will be fine, but not thrilling.

The Veloster Turbo makes use of a 1.6-liter turbo-4 that’s down on displacement but way up on power: 201 hp and 195 lb-ft await drivers to be sent forward through either a 6-speed manual or a 7-speed dual-clutch automatic, and the Veloster R-Spec can be had with a B&M Racing short-throw manual gearbox.

The turbo’s torque peaks at a low 1,500 rpm, enough to help it sprint to 60 mph in about six seconds while providing ample power in both around-town and high-speed passing situations. Acceleration is accompanied by synthetic sound piped into the cabin, which can be turned off.

Various drive modes rework transmission shift points and either add or subtract steering heft. In any mode, the car handles confidently and delivers a quality ride thanks to a multi-link rear suspension swapped in with last year’s redesign. The Veloster rides firmly, but not uncomfortably — at least on the smooth Texas roads where we have sampled the car so far. Grip is terrific with the optional summer tires, which drivers in wet or cold climates will want to swap for winter rubber around Thanksgiving.

The car’s steering disappoints up against the predictable, less-synthetic feel offered by the Civic Si.

For a pole-vault into VW GTI territory, meet the Veloster N. It’s strapped with a high-output turbo-4, stiffer suspension, better brakes, and a clear target in mind.

The Veloster N likes to turn corners rather than plow through them, something we’re not sure we’ve been able to say about a car with the automaker’s stylized H affixed to its nose. Bigger brakes than the standard Turbo, which can be upsized to even larger platters, pair with standard Michelin Pilot SuperSport and optional Pirelli P-Zero rubber to give the car proper German sportster bona fides. As they should since the Veloster N was developed by a team led by an ex-BMW engineer in Germany.

The 250-hp 2.0-liter turbo-4 is boosted to a healthy 275 hp with the optional Performance package, which strikes us as $2,000 well spent as long as you’ve budgeted for replacing pricier tires and brake pads. The 6-speed manual gearbox delivers short, positive shifts, and the standard rev-matching prevents upsetting the car’s weight balance when slipping down a gear or two. Aided by the grippier rubber, the retuned steering and an electronic limited-slip differential on the front axle make the most of corners. As a track-day car, the Veloster N is a new favorite.