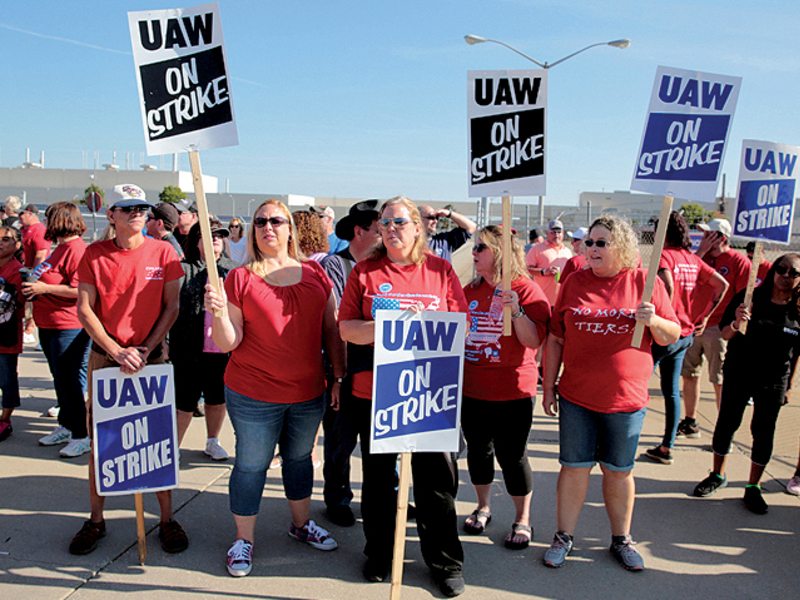 DETROIT — General Motors’ new contract with the UAW, which members ratified last week after a 40-day strike, gives the automaker what it wanted: the closure of three underutilized plants, a key piece of its restructuring plan.

But the win comes with a trade-off. The sweeteners offered to secure workers’ approval, including a record $11,000 ratification bonus and hourly wages topping out at more than $32, could put the automaker at an even greater cost disadvantage compared with nonunion competitors.

“A lot of their equity strategy was dependent on doing the restructuring, reducing capacity. That’s what a lot of investors were looking at,” Jefferies analyst Philippe Houchois told Automotive News. “From that standpoint, they were willing to pay up to get that done.”

The pay increases, lucrative bonuses and other cash incentives that GM put in the deal helped persuade 56 percent of production workers and about two-thirds of skilled-trade workers to vote in favor of it. Opposition from workers displaced by this year’s plant closures and from many of those who earn lower wages at GM’s parts-making subsidiary wasn’t enough to derail the deal.

The UAW agreed to let GM close three of the four, including the Lordstown plant in Ohio that President Donald Trump and other politicians heavily lobbied to save. The one survivor is Detroit-Hamtramck Assembly, which GM will spend $3 billion retooling to make electric vehicles.

Still, GM will spend more overall on labor under the contract and has lost as much as $1.75 billion since workers went on strike Sept. 16, according to Anderson Economic Group, a Michigan consulting firm.

GM is expected to give its first official indication of the strike’s effect on its finances when it reports third-quarter earnings Tuesday, Oct. 29, although only the first two weeks of the walkout occurred in that quarter.

Under the contract, workers are to receive their ratification bonus as well as a 4 percent bonus within days. Base wages would increase 3 percent in 2020 and 2022, with an additional 4 percent bonus payment in between, and new hires would have to wait four years to reach top pay rather than eight. Profit-sharing is no longer capped at $12,000 per year, though that would come into play only if GM generated more profits in the years ahead than in 2016, when U.S. auto sales achieved record volume.

GM’s hourly labor-cost gap compared with international automakers in the U.S. is $13 per hour on average, according to the Center for Automotive Research in Ann Arbor, Mich. The automakers went into this year’s negotiations aiming to narrow that gap, but the wage increases, lump-sum payments and uncapped profit-sharing are likely to raise costs instead, said Kristin Dziczek, vice president of industry, labor and economics at the center.

The closures of Lordstown and transmission plants in Baltimore and suburban Detroit would raise GM’s U.S. plant capacity utilization rate to 72 percent in 2020 from 67 percent this year, according to LMC Automotive.

GM also will continue to take advantage of lower labor costs in Mexico, despite the union’s complaints. The contract did not include any production shifts out of Mexico, where GM gets about a quarter of its North American production, according to estimates by the Automotive News Data Center. GM makes the Chevrolet Blazer, Equinox and Silverado in Mexico, among other vehicles, and was the country’s largest auto producer in 2018.

Instead, the union shot down GM’s proposed health care changes and got the company to give temps a direct path to permanent employment, which allows them higher pay and better job security. Next year, full-time temps with at least three years on the job can get permanent status, and the conversion happens after two years on the job starting in 2021.

Health care “wasn’t a win for [GM] at all,” said Art Schwartz, a former GM negotiator who’s now president of Labor and Economics Associates. “The UAW would strike indefinitely for health care costs.”

Because neither Ford Motor Co. nor Fiat Chrysler Automobiles is asking for plant closures — on the contrary, FCA is building a plant in Detroit that will employ thousands of new workers — the contract’s benefits for those automakers are slim.

If Ford and FCA use GM’s agreement as a template, as expected, Dziczek said, “what are their wins at the table?”

Reduced health care costs, for example, would have benefited all three companies. Under the pattern-bargaining philosophy, the union likely will demand the same wage increases and lump-sum payments from FCA and Ford.

The UAW said it would next focus on reaching a deal with Ford before moving to FCA.

“Because FCA and Ford have no particular issues of plant closures to negotiate, the fact that GM paid up to get those plant closures will also impact Ford and FCA,” said Houchois, the Jefferies analyst. “The pain of fixed costs on the labor side will be shared, but on the capacity side, it’s a net gain for GM.”

The lump-sum payments, wage increases and bonuses made the latest contract expensive for GM, added Schwartz.

But by closing the plants, “the principal of ‘the company runs the company’ is maintained. GM gets to run the business.”