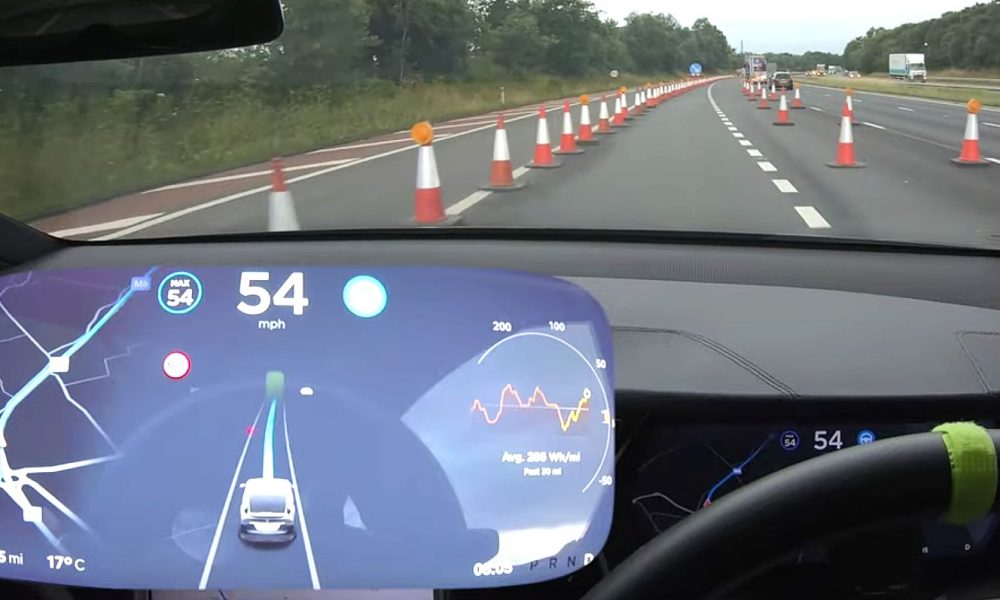 Tesla has started to roll out Software Update 2019.36.1, showing improvements to the Driving Visualization feature. Tesla Model 3 owners are noticing cones being displayed on the vehicle’s center touchscreen, thereby creating a more detailed view of objects on the road and adding an extra sense of awareness of a driver’s surroundings.

Kelvin Yang shared an image of his Tesla Model 3’s dash displaying the rendering of traffic cones. This is the most recent object the software is able to recognize, an addition CEO Elon Musk said would be available “soon” just two weeks ago. The announcement came in response to an Autopilot video shared from a Tesla owner, showing the vehicle navigating safely away from cones on the highway, but Musk stated the Visualization feature would be able to render the small, bright orange obstacles in the near future. Even though most traffic cones are fitted with reflective tape to increase visibility, there are instances where this is not the case, and colliding with a cone at a high rate of speed could cause excess body damage.

Driving Visualization renders a vehicle’s surroundings, giving a live and detailed look of what is around the car at all times. The software shows a very descriptive and realistic illustration of everything near the car, and improvements to Driving Visualization have been frequent since its release in May 2019. Tesla has added features like recognition of vehicle type, where it will accurately depict the size and shape of the vehicle on your screen, and a rotate and zoom feature that helps eliminate blind spots. In Tesla’s V10 release notes, the company stated Zoom and Rotate would help drivers “enjoy an improved 360 view around your car — a more dynamic interface recognizes and displays a wider variety of objects and lane lines. Since driving visualization is on the touchscreen in Model 3, you can also drag and pinch the display to temporarily adjust view angle and zoom. After a short period of inactivity, the visualization will return to the default position.” The ability to zoom and rotate would be ideal for navigating through busy parking lots for owners who do not have Full Self-Driving’s Smart Summon feature.

Recently, Tesla added more improvements when the software gained the ability to render semi-trucks and buses, a detail that could assist drivers during the nighttime hours when vision is limited due to darkness. The constant addition of various surroundings will help drivers avoid collisions with objects on the road, and will add additional driving confidence. The improvement of Tesla’s vehicles through regular software updates continues to make driving a safer activity for owners and pedestrians alike.