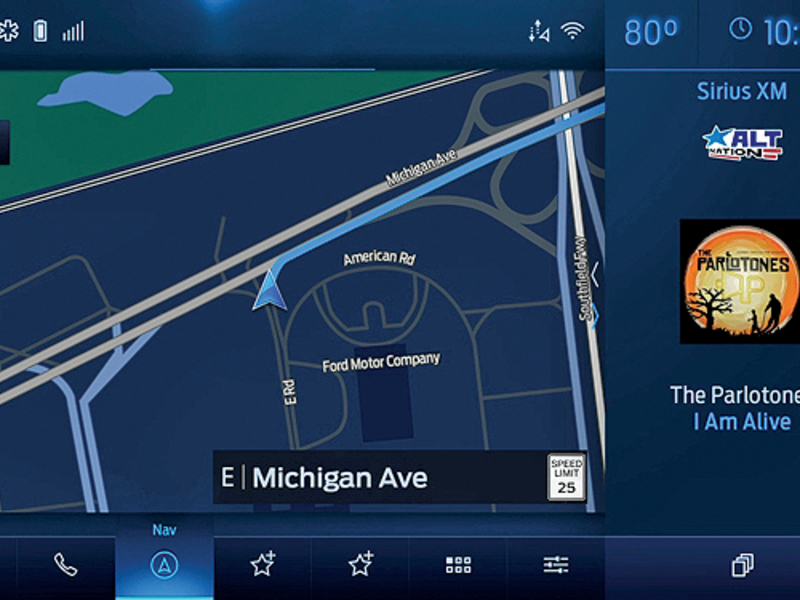 DETROIT — The Tesla Model 3 has a 15-inch touch screen in the middle of the dashboard.

Ford Motor Co. is planning to top that next year with a 15.5-inch screen available on the fourth generation of its Sync infotainment system.

Sync 4 will offer over-the-air software updates, which could eliminate some of the trips customers now make to a dealership to have their vehicle’s computers reflashed or updated as part of a recall. Wireless updates are another hallmark of Tesla.

Ford officials would not say which vehicles will get Sync 4 first, but, because changes to the electrical system and hardware are needed, they would be part of a redesign or launch of a new model.

The over-the-air update capability aims to make Ford’s infotainment system as easy to use as a cellphone, said Don Butler, Ford’s executive director of connected vehicle and services. “This levels the playing field,” he said during a media preview of the system.

An 8-inch touch screen is standard, but customers will be able to upgrade to a 12- or 15.5-inch screen. The largest screen uses what Ford calls dash cards across the bottom. The square cards contain frequently used apps, such as navigation, entertainment and phone, that are launched by touch or voice command.

One goal of Sync 4 is to reduce driver distraction, some of which comes from scrolling through menus and tabs.

The system includes standard cloud connectivity and more conversational voice recognition. It can be used to locate restaurants or other destinations similar to how a consumer would ask Apple’s Siri assistant or Amazon’s Alexa. Sync 4 is activated by saying, “OK, Ford.”

Some updates will be invisible to customers, Ford said. Software can be installed in the background while the old software continues to run. When the new software is downloaded and ready to install, the driver is notified. Most updates will take two minutes or less, Ford said.

Ford doesn’t plan to use Sync for recalls initially and expects the first over-the-air updates to take place about six months after Sync 4 debuts. Those updates will focus on convenience, entertainment, quality and new features.

Butler said Ford has consulted with dealers about eventually carrying out some recall work via over-the-air updates.