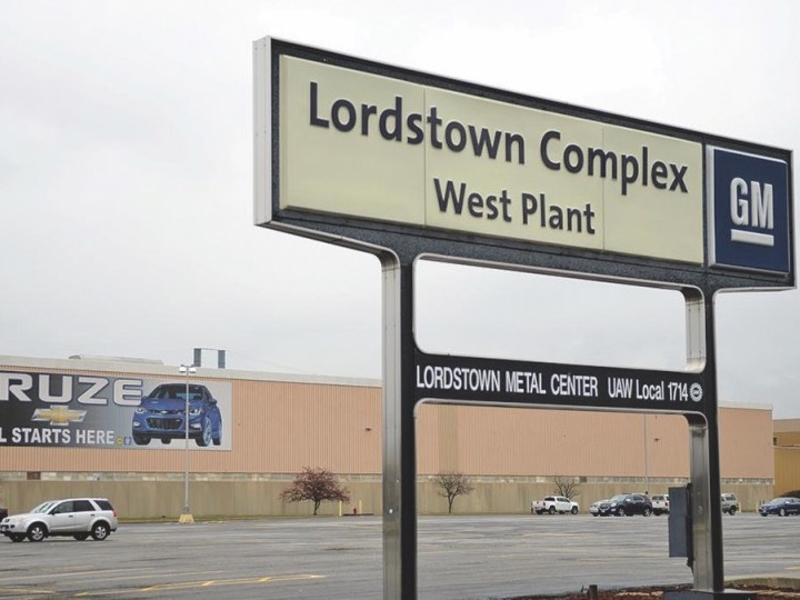 The acquisition that the two companies plan to announce Thursday ends an era that began when GM opened the complex in 1966. The factory’s fate was largely sealed when the UAW was unable to convince GM to keep it in the fold as part of a new labor contact ratified late last month.

Terms of the deal aren’t being disclosed. Workhorse Group Inc., which is affiliated with Lordstown Motors but doesn’t share any ownership, climbed as much as 12 percent to $2.75 in New York trading.

The plant has been a political football since GM announced a year ago that it wouldn’t allocate future product to Lordstown. The decision was an immediate liability for President Donald Trump, who a year earlier went so far as to discourage rally-goers from selling their homes because of all the jobs he would bring back to the area. Democrats seized on the development as a symbol of unfulfilled promises made to voters in a key battleground state.

Trump was so eager to endorse GM’s discussions to sell the Lordstown plant that he preempted the announcement of the talks in May by the largest U.S. automaker and Workhorse, which totaled just $6,000 of revenue during its latest quarter.

With the plant acquisition out of the way, Steve Burns, who used to lead Workhorse and is now CEO of Lordstown Motors, is turning his attention to phase two: seeking cash to convert the Lordstown plant from making gasoline-burning Chevrolet Cruze sedans to plug-in pickups.

“We are going to be fundraising for a while,” Burns said in a phone interview. “We have to stand up an auto company.”

Debut model
Lordstown Motors is calling its debut model Endurance and targeting fleet buyers who make up a big chunk of the truck market.

GM said Thursday it believes “LMC’s plan to launch the Endurance electric pickup has the potential to create a significant number of jobs and help the Lordstown area grow into a manufacturing hub for electrification.” GM is not investing in the venture.

Workhorse Group is among the bidders for a lucrative contract to make plug-in mail trucks for the U.S. Postal Service. The two companies share intellectual property related to electric-drive systems, Burns said.

If Workhorse wins the postal contract, the Lordstown plant could eventually build those vehicles, but it isn’t guaranteed, he said. Lordstown Motors does have an agreement to transfer 6,000 existing pre-orders for Workhorse’s electric truck prototype called the W-15 to Lordstown Motors for production.

If he raises the cash to get Endurance into production, Burns said he would work with the UAW and look to hire staff who didn’t accept the automaker’s offer to transfer to one of its other facilities. He wants experienced vehicle assemblers to build the trucks.

Four motors
Burns said the Endurance will be built with four motors — one for each wheel — to deliver all-wheel drive. It will have fewer moving parts than existing pickups, which could translate to lower repair costs for fleet operators. It also will have outlets that enable owners to run power tools off the battery.

Lordstown Motors has the money to buy the plant and work on the vehicle, but Burns will need more to continue development, conduct crash and safety testing, get the truck approved for sale and retool the factory.

The UAW opposed the Lordstown plant sale because of the risk involved. In addition to being wary of tying its fortunes to a cash-strapped startup, future demand for electric vehicles is uncertain. Several electric-vehicle upstarts have failed, including Fisker Automotive Inc., which was acquired by a Chinese auto-parts conglomerate after bankruptcy. Even Tesla Inc. struggles to make consistent profit.

“We’ve got a solid team and I’m confident in our fundraising efforts,” he said.